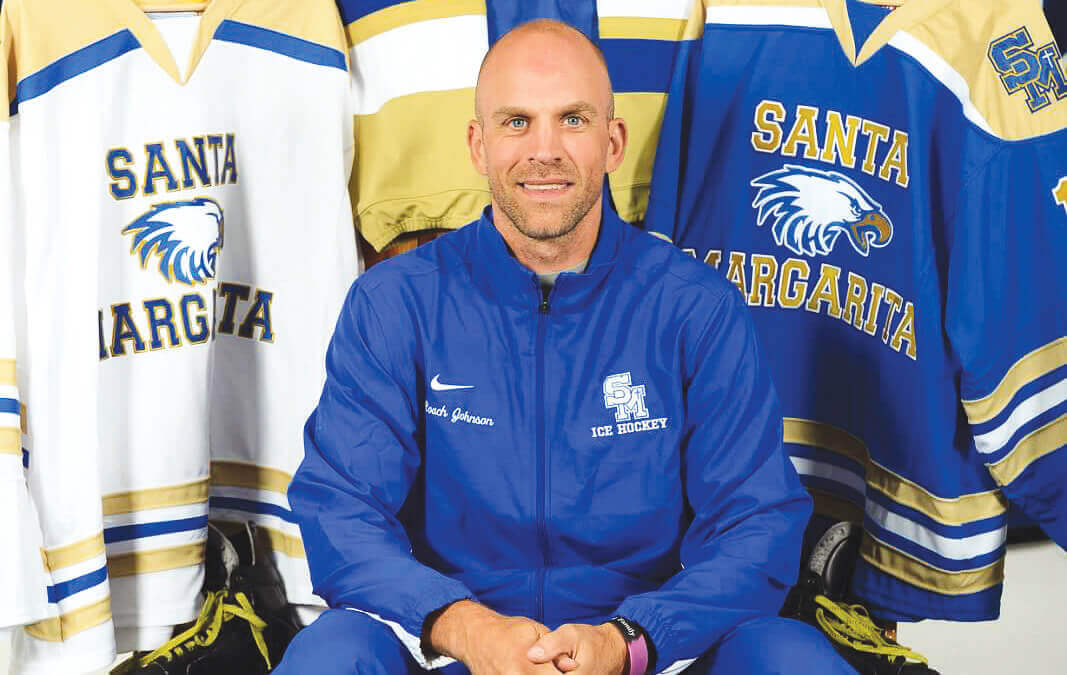 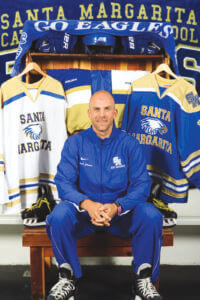 Santa Margarita Catholic High School Head Hockey Coach Craig Johnson has resigned from his position as the school’s head hockey coach, school officials announced. Johnson said he is currently unable to devote the time needed to coach at SMCHS. He will serve as a consultant for the ice hockey program during 2020-2021 season.
Johnson led the Santa Margarita Eagles (Anaheim Ducks High School Hockey League) to three national titles in 2013, 2018 and 2019. In 2015 and 2017, the team took silver and in 2011 bronze. Santa Margarita is California’s only USA Hockey national varsity champion. The program has also won four state titles and three ADHSHL Division 1 championships. Eagle ice hockey has achieved a 700% winning percentage in the program’s 11-year history with Johnson at the helm. Alumni continue to have success beyond SMCHS. Players have gone on to play NCAA Division 1 ice hockey; Ryan Johnson ’20, Coach Johnson’s son, was a first-round draft selection in the NHL and Annie Pankowski ’13 is a two-time world championship gold medalist.
“I cannot say thank you enough to Coach Johnson for the tremendous impact he has made as the founding coach in the program’s 11-year history and the longest-tenured coach in ADHSHL history,” Vice President Sammer Darwazeh said. “He has played a key role in building a solid foundation for this fantastic program to grow and has been a true leader and model for every Eagle who has had the opportunity to represent SM and play for him. We appreciate his numerous contributions and accomplishments that have made a lasting impact on SMCHS, our nationally-recognized ice hockey program and growing youth hockey in California. I am grateful Coach Johnson will remain a member of the ice hockey coaching staff as the program consultant for the 2020-2021 season.”
Johnson is a 10-season National Hockey League veteran and former U.S. Olympian. He spent most of his career playing for the Los Angeles Kings and played for the Ducks in 2003-04. He led the SMCHS team
from its inception in 2009, helping to grow the program while establishing a winning culture and developing players’ skills and confidence.
“My family and I are grateful to Santa Margarita’s leadership and the organization for the past 11 seasons,” Johnson said. “We made great strides together with building the hockey program, and I am very proud of our school and players’ accomplishments. Santa Margarita is a special place to my family and me. All three of my children attended the school, and I was able to coach both of my boys in the program. It was because of the players that Santa Margarita hockey was more than a hockey program but a family.”
The school’s Varsity Division 1 and Division 3 teams compete in the Anaheim Ducks High School Hockey League and California Amateur Hockey Association, as well as North American Elite Invitational Tournaments and Showcases. The Eagles call the new $110 million Great Park Ice and FivePoint Arena in Irvine, Calif. their home. Ice Hockey activities, practices, exclusive locker-room access, and the strength and conditioning program are held in the premier facility.
An immediate and thorough head coach search is underway. In the interim, Assistant Coach Ladislav Kohn will oversee on-ice training. Kohn is a Czech former professional ice hockey forward who played in the NHL for the Calgary Flames, Toronto Maple Leafs, Mighty Ducks of Anaheim, Atlanta Thrashers and the Detroit Red Wings. Coach Kaelin Groon, who played collegiate hockey for UMass Dartmouth, and Coach Jason Marshall, a 12-year defenseman with the NHL including eight seasons with the Anaheim Ducks, will continue to serve as assistant coaches.
ABOUT SANTA MARGARITA CATHOLIC HIGH SCHOOL: Santa Margarita Catholic High School offers a coeducational, college-preparatory education developing students who are people of faith, skilled lifelong learners, healthy individuals and involved citizens of the world. Founded in 1987 under the leadership of the Diocese of Orange, the school’s 42-acre campus is nestled against the picturesque Saddleback Valley Mountains in Rancho Santa Margarita. Ranked as the No.1 Catholic high school in Orange County by Niche.com, the school is home to more than 1,640 students. For more information about Santa Margarita Catholic High School, visit www.smhs.org
ABOUT THE EAGLES ICE HOCKEY PROGRAM: Established in 2009, Eagles Ice Hockey complements Santa Margarita’s college-preparatory academics by developing players’ skills and confidence for success at the next level and beyond.
Santa Margarita Eagles Ice Hockey has won three USA Hockey national championships, four California state championships and three ADHSHL Division 1 championships. The program is California’s first and only USA Hockey national varsity champion. For the latest Eagles Ice Hockey news, follow twitter.com/SMEaglesHockey