Over the last several decades whale watching has become an amazing form of entertainment for millions of people all over the world who want to get a glimpse of the amazing majestic creatures we all know and love as whales.
Through whale watching numerous countries have been able to improve their economic success while educating people about the importance of whales and other marine mammals in regards to why they are important, how they help our ecosystem and their role in maintaining a balanced oceanic food chain.
This article will attempt to explore the topic of whale watching, its historical beginnings and how we moved from commercial whaling to whale watching as a tourism and economy booster.
What is whale watching?
Whale watching is the act of observing of whales in their natural habitat (similar in a way to bird watching) which involves spectators standing at the end of a pier or on the deck of a boat with binoculars watching these marine mammals as they live undisturbed in their natural habitat.
While whale watching is most commonly used as a form of recreation, it also serves as an educational and scientific way to study the species without interfering with their habitat or lives.
In some instances marine biologists and researchers may use whale watching opportunities to study the habits, social structure and migrations pattern of these marine mammals among other things.
Whether used for recreation or for scientific research whale watching has become an international hobby and can be seen in many countries including the US, Spain, Britain, Australia, New England and Alaska among several other popular tourist locations.
In fact since its inception the whale watching industry has become a billion dollar annual business employing thousands of people and serving millions of whale watchers each year.
Whale watching tourism is extremely important for developing countries looking to bring awareness to their nation as well as helping a number of economies by bringing in additional capital to countries that can benefit from the additional tourism boost.
Among the many different recorded whale species some of the most popular species for those who enjoy whale watching include the blue whale, humpback whale, bowhead whale, gray whale, fin whale and minke whale among others.
While whale watching spotters enjoy watching and observing whales these marine mammal enthusiasts may also look out for a number of different dolphin species such as killer whale, (killer whales belong to the dolphin family), bottlenose dolphins, hourglass dolphins and other popular dolphin species that may be found among the group of whales they’re observing.
Not only has whale watching become extremely profitable for a number of different countries it has also brought awareness about the current state of endangered whale species to millions of people and some whale watching businesses and organizations use part of their income to help fund whale conservation’s and awareness programs aimed at helping these marine mammals recover from their endangered status while improving laws to further protect these important animals and prevent them from facing possible extinction.
From commercial whaling to whale watching
Although whales are an extremely loved and well appreciated species today by many counties and cultures they were once the victims of excessive commercial whaling expeditions.
In fact whales have been hunted since the B.C. era, however previous hunting of the species had not caused much ecological damage until the 17th century when the combination of new boating and hunting technology along with the use of organized fleets advanced enough to allow larger numbers of whales to be hunted faster and more efficiently.
The combination of new technology along with increasing commercial needs for the use of whale oil, blubber and meat led to highly competitive whaling activities that further decreased existing whale populations.
During this era whales were frequently hunted so that their parts could be used to making products and goods such as:
Oil – Lamp oil, soap, perfume, candles and cosmetics 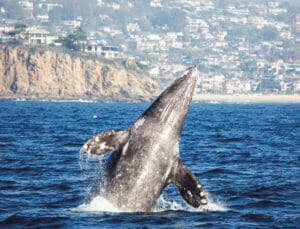 Food – Cooking oil, margarine and whale meat
Clothing – corsets and umbrellas
and various other products including tools such as fishing hooks.
The commercial whaling industry continued to boom in the 18th and 19th centuries as competitive whaling became a highly lucrative business for those involved in hunting, selling and using whale parts.
As more and more whales continued to be killed concerns regarding the endangerment of whaling populations began to grow and a number of species started to become endangered.
Eventually the increasing number of whales being killed annually began to spiral out of control forcing organizations to rally against unnecessary whaling activities.
Fast forward to 1946, the international Convention for the regulation of whaling (ICRW) was formed by a number of different nations to oversee commercial whaling and further limit hunting on endangered and threatened species.
In 1986 the International Whaling Commission (IWC) proposed restrictions on all commercial whaling activities and in 1986 laws were put into place to enforce the banning of all illegal commercial whaling activities.
As the commercial whaling era began to come to an end in most countries the introduction of whale watching as a tourist attraction began to grow.
History of whale watching
The history of whale watching (in the US) can be dated back as far as 1950 where the Carbillo National Monument in San Deago was declared a public place to observe gray whales in their natural habitat.
Also in San Diego the first tourist excursions (boat rides) began and cost tourist $1 to take a boat trip into the ocean for an opportunity to watch whales up close.
Since then whale watching has become an annual billion dollar tourism business employing thousands of workers and serving millions of whale watchers each and every year.
Over the years whale watching has also become a popular method used to attract tourist to developing countries in the hopes of bringing in more capital for economic stimulation and growth.
Due to the rapid growth of whale watching as a commercial business and tourist attraction some concerns about the rate and growth of whale watching have become a popular debate.
Several concerns have developed including the concern of ships, technology and people interrupting the whales natural habitat, putting whales at danger and interrupting their natural breeding and migration patterns which could lead to further endangerment of the species.
Others view it simply as a form of recreation and/or for scientific exploration and support the views of protecting whales, while also stating that whale watching hasn’t caused any disturbance to the whale species and may even help by causing economic stimulation and awareness to the current whale situation.
The International Whaling Commission
In 1993 the International Whaling Commission (IWC) did an assessment on whale watching activities, and in 1996 adopted a resolution and set up general guidelines for whale watching which compiled whale watching regulations from around the world to ensure the safety of whales while allowing whale watching to remain a recreational activity for tourists.
Some of these regulations include maintaining an appropriate distance from whales as not to cause any interruption to their natural habitat and limitations on how to and how not to interact with whales.
Courtesy of whalefacts.org