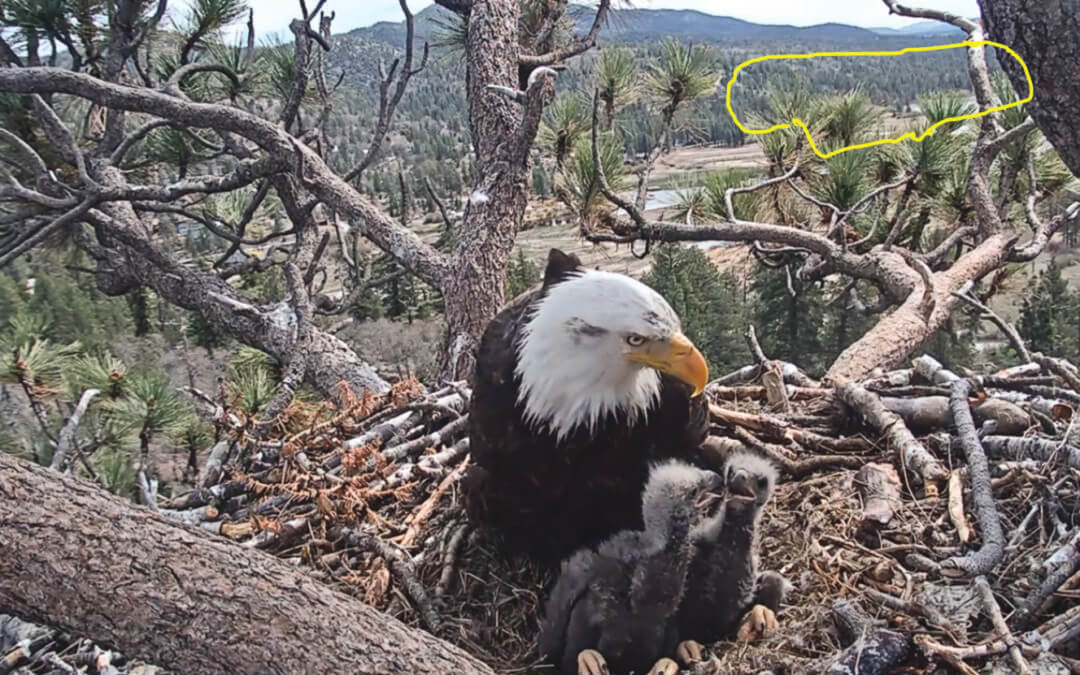 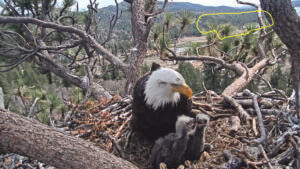 According to the Final Environmental Impact Report submitted to the County of San Bernardino, a proposal for 50 luxury house sites with new roads, a huge private marina and parking area only ½ mile from Big Bear Valley’s only bald eagle nest would have significant impacts on bald eagles that cannot be mitigated. The now forested lakefront site can be seen from the nest cam. The decision will be made by County Supervisors on October 8.
The County’s planning staff is recommending project approval, citing the need for housing as an overriding circumstance to the harm that would be caused to bald eagles. Big Bear Valley currently has over 600 homes for sale, 150 more than a year ago, with many already on the market for over a year.
The proposed project site, along a National Forest boundary, is currently zoned for 1 house per 40 acres, rural living, so approval would require a zone change. County code requires any zone change to be in the public interest. According to studies, increases in housing density along the National Forest boundary escalates the fire risk for the whole area. This valley is already plagued with such a high fire risk that many local homeowners have had their homeowner’s insurance cancelled.
This zoning change would also aggravate the area’s potentially dire evacuation deficiency. According to an analysis that was released by USA TODAY Network-California last May, Big Bear Valley communities, including the north shore stretch where this site is located, are within the worst 1% statewide when it comes to population-to-evacuation ratios.

Regarding the bald eagle impacts, the most recent EIR concluded in 2011 that there would be significant adverse impacts to bald eagles. That analysis was based on bald eagles only wintering in the valley for a few months a year. Beginning in 2012, a pair of bald eagles began nesting only ½ mile of this proposed project site. The much more significant impacts this project would cause based on this key change have never been evaluated.
The bald eagle pair nesting here, Jackie and Shadow, became popular nationwide as people watched their eggs hatch on the live stream of the Friends of Big Bear Valley’s bald eagle nest camera. Tens of thousands of people, including classrooms across the country, watched as the eagles raised their chicks this past spring.
Other major issues include:
-limited water supplies (nearby wells already run out of water in busy times),
-increased traffic on this already accident-prone section of highway,
-the unnecessary loss of endangered plant species and a rare habitat all of which exist here and nowhere else in the world. Less than 1/3 of it is planned for conservation.