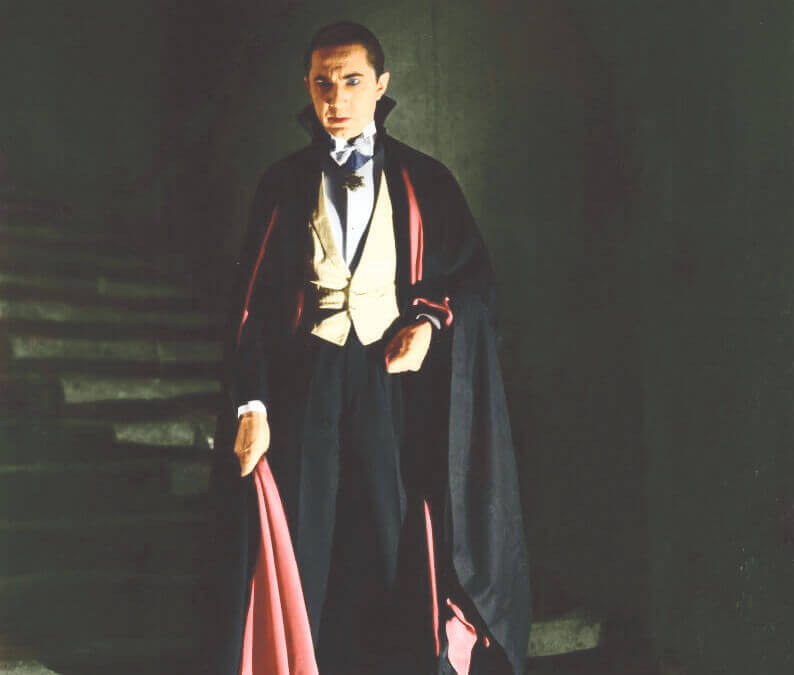 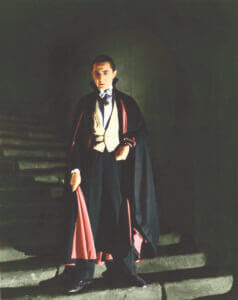 The Academy Museum of Motion Pictures is pleased to announce numerous iconic movie costumes it has acquired over the last year through generous donations, partial gifts, and purchase. Costume design will be one of the many motion-picture arts explored in the Museum’s inaugural exhibitions.
Among these exceptional additions to the fast-growing collection is the cape that Bela Lugosi wore in his legendary performance as the title character in Dracula (1931). A partial gift from the Lugosi Family, the famed Dracula cape was personally owned by Bela Lugosi after filming the classic. Following the runaway success of the 1931 movie, Lugosi continued to wear the cape on stage and in personal appearances. The cape remained in his possession until his death, and then in the possession of his ex-wife, Lillian Lugosi. Lillian later presented it to her and Bela Lugosi’s son, Bela G. Lugosi.
“My father’s screen-worn cape has had a very special place in my life and in the lives of my children and grandchildren. In fact, it has been a part of my mother’s household and then my household since I was born—for over 80 years,” said Bela G. Lugosi. “After several years of discussions with Founding Director Kerry Brougher, who showed such care and appreciation of its important role in film history, it became clear that there is no better home for the cape than the Academy Museum, allowing movie lovers to view a piece of classic horror film history and enjoy Bela Lugosi’s acclaimed performance for years to come.”
“It has been our pleasure to work with Kerry Brougher and Exhibitions Curator Jessica Niebel as we navigated the emotional journey of transferring my grandfather’s treasured Dracula cape from our family collection to the Academy Museum,” said Lynne Lugosi Sparks, granddaughter of Bela Lugosi and Chief Executive Officer of LUGOSI LLC.
Jessica Niebel said, “This outstanding acquisition simultaneously represents the character of Count Dracula as a cultural icon and the life and career of an extraordinary actor, Bela Lugosi. It is important to us as a museum to be able to restore and safeguard this artifact, especially knowing that much of the material history of the classic horror cycle has been lost forever. We are deeply grateful to the Lugosi family for entrusting us with a treasure that means so much to them.”
Other major gifts include:
• Shirley Temple’s gown, cape, crown, and scepter from The Little Princess (1939), donated by the Family of Shirley Temple Black. Like many of the costumes worn by the child star, whose outfits (unlike those of other actors) could not be easily repurposed for use in other films, they are in near-pristine condition.
• Wedding dress worn by Jennifer Jones in Madame Bovary (1949), donated by the Arnold R. Kunert Collection
• Cloche worn by Debbie Reynolds in Singin’ in the Rain (1952), donated by Lauri Buehler
• Gown worn by Ann Blyth in The King’s Thief (1955), also from the Kunert Collection.
The Academy Museum has actively been acquiring three-dimensional motion picture objects since 2008. Its holdings now number approximately 3,500 items representing costume design, motion picture technology, production design makeup and hairstyling, promotional materials and memorabilia, and awards.
The Museum has also expanded its collection through purchase, acquiring items including:
• Marlene Dietrich’s Helen Faraday evening robe from Blonde Venus (1932)
• Gene Kelly’s sweater and slacks from An American in Paris (1951)
• Sammy Davis, Jr.’s two-piece, black-and-white-patterned Sportin’ Life suit from Porgy and Bess (1959)
• Costumes from The Shining (1980), including the crimson jacket worn by Jack Nicholson
• Black wig with gold trim worn by Elizabeth Taylor as Cleopatra (1963)
• Diana Ross’s Billie Holiday jacket and skirt ensemble from Lady Sings the Blues (1972)
• Richard Pryor’s baseball uniform from The Bingo Long Traveling All-Stars & Motor Kings (1976)
• Black sequined dress worn by Sonia Braga as the title character in Kiss of the Spider Woman (1985)
• Denim and flannel ensemble worn by Kathy Bates in Misery (1990)
• Three-piece, poly-cotton waitress uniform worn by Susan Sarandon in Thelma and Louise (1991)
• Robe and shorts that helped Jeff Bridges transform himself into The Dude in The Big Lebowski (1998)
• Costume worn by Saoirse Ronan as Mary Stuart in Mary Queen of Scots (2018)
About the Academy Museum of Motion Pictures The Academy Museum will be the world’s premier institution dedicated to the art and science of movies. The Museum will be simultaneously immersive, experimental, educational, and entertaining. More than a museum, this dynamic film center will offer unparalleled experiences and insights into movies and moviemaking. Designed by Pritzker Prize–winning architect Renzo Piano, the Museum is restoring and revitalizing the historic Saban Building—formerly known as the May Company building (1939)—at the corner of Wilshire Boulevard and Fairfax Avenue. The Saban Building will feature six floors, including exhibition spaces, the 288-seat Ted Mann Theater, an education studio, special event spaces, conservation areas, a café, and store. The new spherical addition will connect to the Saban Building via glass bridges and will feature the state-of-the-art 1,000-seat David Geffen Theater and the rooftop Dolby Family Terrace with sweeping views of the Hollywood Hills.
The Campaign for the Academy Museum is headed by chair Bob Iger and co-chairs Annette Bening and Tom Hanks. These industry leaders join other generous philanthropists who have named spaces, including Cheryl and Haim Saban (The Saban Building), The David Geffen Foundation (The David Geffen Theater), Dalian Wanda Group (The Wanda Gallery), Rolex (Rolex Gallery), Dolby Laboratories/Family of Ray Dolby (The Dolby Family Terrace), The Walt Disney Company (The Walt Disney Company Piazza), Marilyn and Jeffrey Katzenberg (The Marilyn and Jeffrey Katzenberg Gallery), Steven Spielberg (The Spielberg Family Gallery), Shirley Temple Black and Family (Shirley Temple Education Studio), Cecilia DeMille Presley (Founders Room), Gale Anne Hurd (Hurd Gallery), NBCUniversal, Netflix (Netflix Terrace), Participant Media, Gerry Schwartz and Heather Reisman (Gerry Schwartz and Heather Reisman Mezzanine), The Simms/Mann Family Foundation (Ted Mann Theater), Jeff Skoll, Wendy Stark for the Fran and Ray Stark Foundation, Warner Bros. Entertainment (The Warner Bros. Entertainment Gallery), Wasserman Foundation (Wasserman Bridge), and Wolfgang Puck Catering and Events LLC/Compass Group USA, Inc. The Academy Museum’s Digital Engagement Platform is sponsored by Bloomberg Philanthropies.